The group on a tour of Punjab and Himachal Pradhesh, after a hearty breakfast at the Velvet Clarke Exotica , Chandigarh was speeding through the Chandigarh- Amritsar highway, with the tough looking but graceful with the wheel driver gunning the AC bus, desperately searching with his tongue for the last crumbs of the delicious pastry devoured in the morning.  The team was happily passing through 'the smart city, Ludhiana' as the huge name board suggested and were toying with what to do with the time when the 100 odd KMs were covered in the next few hours , on reaching Amritsar ! Though few passengers who grabbed the Daily at the hotel lounge and those who managed to stay awake despite the speed of the bus,  hovered over the headlines of a nationwide bandh, little did they realize about the impending roadblocks until they crossed Phagwara, a still sleeping town. As the vehicle climbed the long over bridge it suddenly started losing speed on seeing vehicles coming in the opposite direction , but in the same lane and within meters, the driver decided to reverse the bus and take a detour , as there were some problems reported due to bandh, on the road ahead. But even the alternate routes were promptly plugged and soon all roads out of Phagwara, were reported to be closed due to the nation wide bandh and our bus was stranded mid way, not knowing where to go. When the driver attempted to drive further we were warned that the locals in that area are aggressive and not to venture into anything that could provoke them as the damage to the property and also people could become imminent. This was proved right when we were looking to proceed and were sternly warned and when the driver took some time to make the turn, the cold look of some young Turks before the roadblock sent a chill down our spines. If only the looks could kill.....!!!

We hurriedly obeyed the majority command and started knocking at some of the major hotels in the area looking for a place to stay until the evening  but most of them had employed heavy security people looking like boxers and when our bus slowed down to make a request , we were sternly waved away , not even allowing us to explain our predicament. The bus made  a slow move to a nearby petrol bunk, which though was closed had its washroom open for the senior citizens, who had by now had a full bladder matching the fear that has filled their hearts.

With every major hotel closing their doors on us and not willing to accommodate, we were at our wits end to find solutions for a safe shelter, lunch and a resting place to escape the heat that has started prevailing through Punjab.  A passing good Samaritan on a motor cycle did try to divert us through another road, but we learnt that the bandh organizers have blocked that too, tightening the noose around the hapless travelers through the rich state.  When the bus driver made a mild attempt to escape the scene under the guise of looking for better place by going on foot, the alert tour organizer and a few in the touring party stopped him and on our prompt he slowly wheeled the vehicle looking for a safer haven, when we saw the grand looking Cabbana Resort and Spa ( http://hotelcabbana.com/ ).

Awed by its grandeur, overawed by the prevailing atmosphere, few of us chose to carefully trod to the front desk, where a smiling Front office Manager patiently listened to our predicament and immediately assured us of a shelter , without bating an eyelid. Unable to believe it, we explained that we are a party of 33 proceeding to Amritsar as part of a Punjab and Himachal tour, when we were hit by the sudden bandh call and that we are concerned about the safety and shelter of the team , mostly consisting of senior citizens. Still smiling, the official summoned the F & B Manager, who ushered the group into their spacious air conditioned hall and the welcome tea served really warmed the cockles of our hearts and it took sometime for us to believe that amongst hotels that prevent entry with some burly boxers , there are also people like Cabbana , who opened up their hearts for the hapless elders to enter.


The entourage not only settled into vantage points in the hall with a nice cool atmosphere, but also set out to explore the beautiful ambiance and were surprised to know that many popular cricketers including M S Dhoni had dined there and their souvenirs acknowledging their delectable food triggered their appetite and after an elaborate photo session capturing the lush greens into their mobiles to munch the scenario later along with their loved ones in the safe confines back home .


The lunch served was a delight and the group also indulged in a siesta , blissfully ignorant of the situation brewing outside. But the hotel officials assured us that we could stay there until complete safety is assured and when they had some news of the bandh drawing to a close they took pains to personally verify with the plying of some large trucks in both directions, and only then they allowed us to leave, with some almost in tears.

This brought a stark reality in front of everyone that though the business is emerging as a dog-eating-dog scenario, there are some soft hearted people too, who care for the welfare of the people in distress even though we had difficulty in understanding their language and vice versa, with the much hated language of the people who left us 71 years back helping us to bridge the communication.

Only when we later came to know that Punjab was one of the places where the bandh was observed in all severity and that  there were some violence too involving loss of property and damage to moving vehicles , did the magnitude of the support offered by the Cabbana Resort and Spa, Phagwara and also the smart and quick decisions of the front desk officials, descended on the team.

Hats of to the hospitality and timely help rendered and the team with Sree Janaki Tours, Chennai bow their heads to the staff and more importantly to M/s Kripa and Kamal along with their support staff. With such warm hearts around, we realize that not all is lost, despite growing business competition and that Indian hospitality Industry still holds a lot of promise !

When you are near Phagwara, it is worth visiting Cabbana, where not only they serve food hot but also add spice with their warm hospitality.  Thank you, Cabbana !! 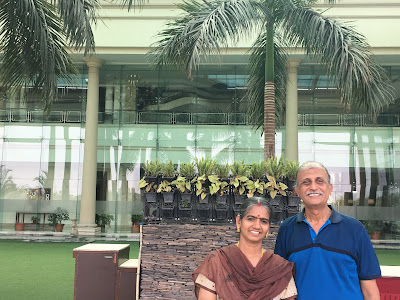 At birth, your life was a plain canvas
Your potential is the colors
Your choices are the strokes on the canvas.
At death, your canvas will be a treasured masterpiece
or
an unnoticed scribbling.
That would be the judgement day
on how good a painter you were
in painting your life.

Kapalee
Chennai, TamilNadu, India
Simple, peace loving introvert and would like to take life by its scruff. Loves reading and music. An avid blogger, aggressive reader keen on learning more